Use single-used balloons to make a single-show eco-artwork!
(continued)

In my ecological and artistic reaction to “post“ COVID-19 balloon parties in city parks, firstly, my three “photographs-poems with decorative borders of the remnants of popped and deflated balloons” were created, parallel in English and Croatian (Fig. 2a – 5a in the previous post), and then one photo-poem of a “transitional” type (Fig. 4b – 5b in the previous post).

They are followed by the photo-poems published in this post, created after somewhat more complex eco-artistic activities at three different sites. The roles of their photograph backgrounds are played by the photographs of my three single-show small scale eco-art “installations”.
I would describe these photographs-poems as “eco-art digital-text-over-photograph photo-poems“.

Here there are also two photographs-poems and eight photographs which all relate the corresponding eco-friendly actions of cleaning up these sites from the balloons waste and its disposing of it in an in/appropriate bin/container.
Basically, all the photographs published in this post serve as visual documentation of the “more photogenic” steps in the process of cleaning up and eco-art activities. At the same time, all the photo-poems have the role of more integral image-text-numeral notes and personal comments on the current social and ecological situation, as well as the role of the segments of the “visual summary” of the entire post. In addition, they follow my earlier cycles of photographs-poems as a personal way of communicating with the environment and the “audience”.

I would definitely like at least my mini-“installations” to serve to environmentally conscious adults, children and teenagers as an incentive for future individual and group ecological art actions with a one-time art game and a short single-show exhibition before the final cleaning up their surroundings. 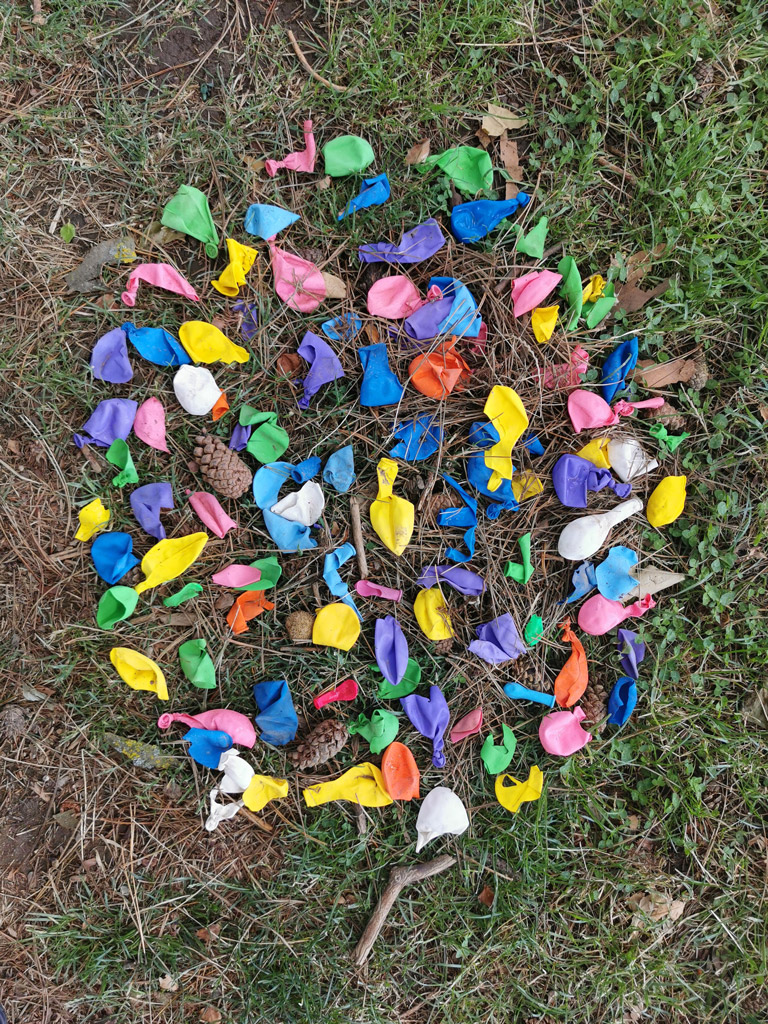 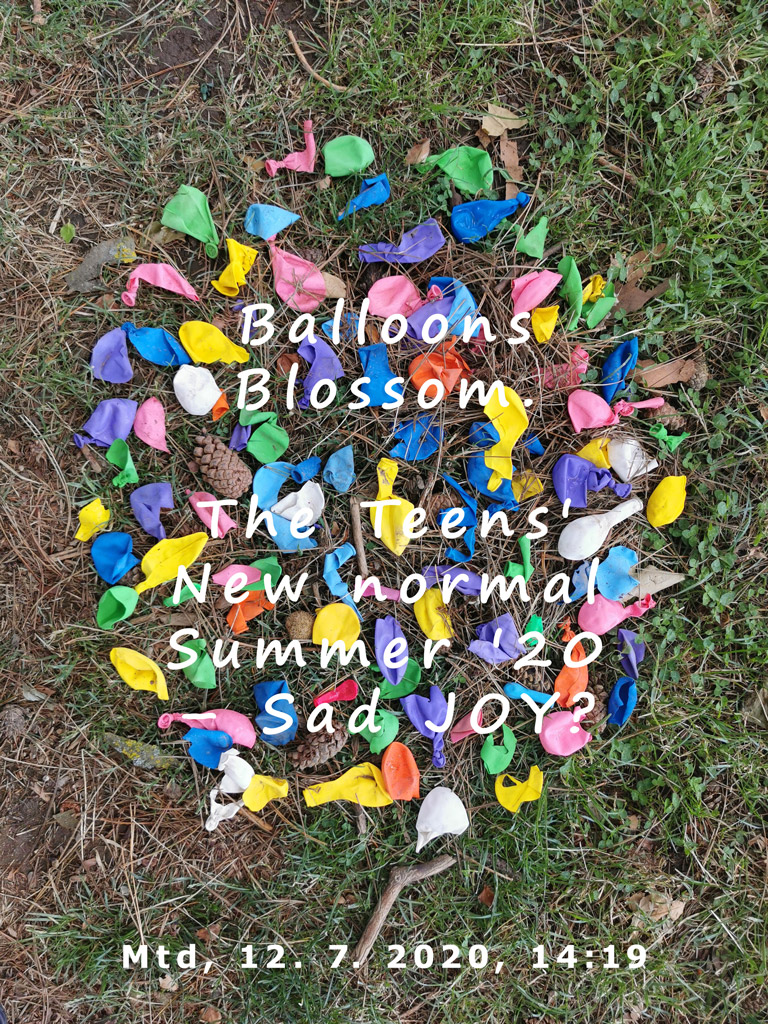 Fig. 7 The oval composition of the remnants of multicoloured water/balloons, on the ground of soil with grass, pine needles and cones, collected near one of the public fountain taps; oval height ca. 80 cm. Jarun Recreation and Sports Centre Park, Zagreb (photo taken on 12. 7. 2020, 14:19).
Fig. 8 My post-corona eco photo-poem Balloons blossom with the digital text over the photograph (Fig. 7). 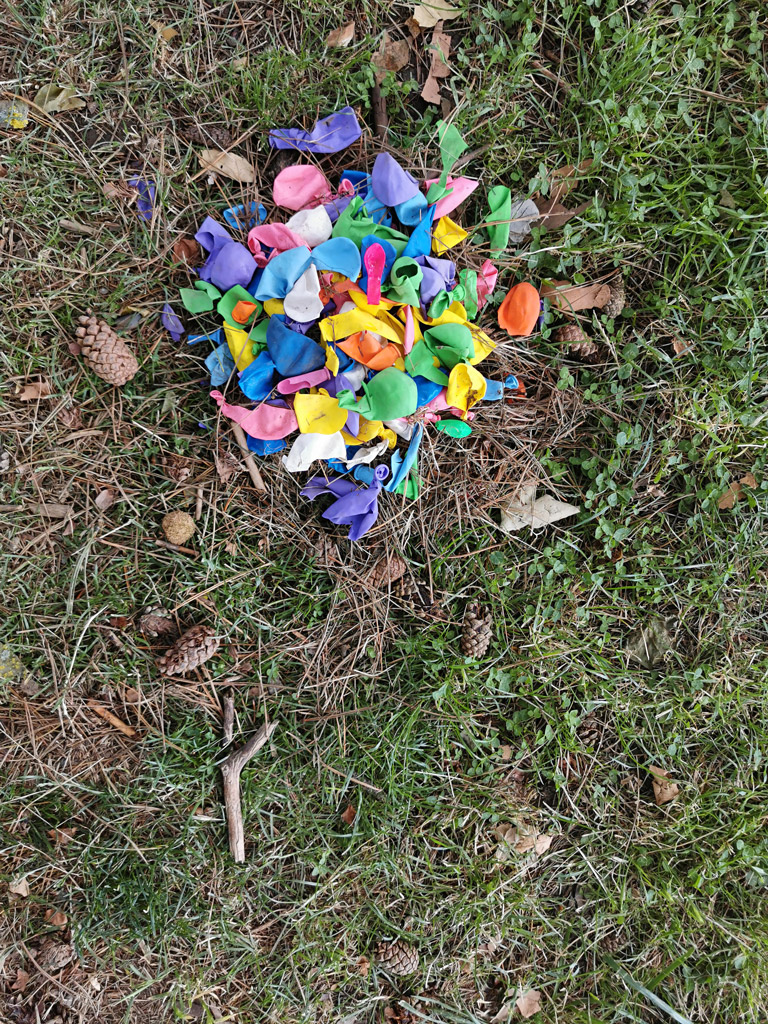 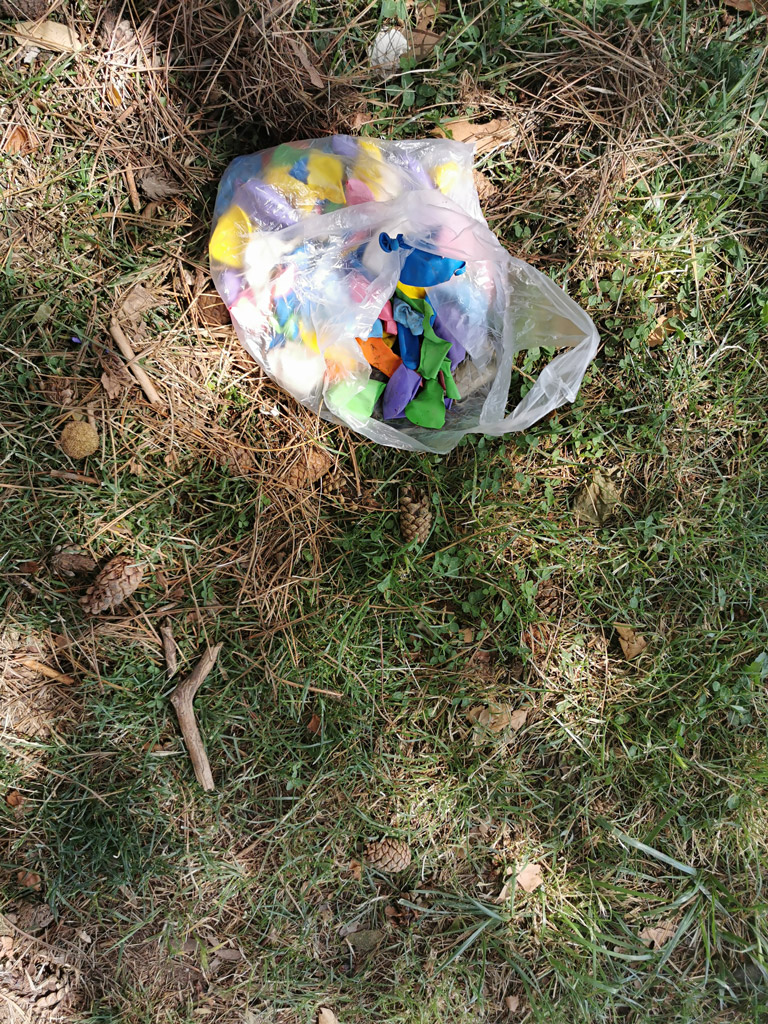 Fig. 9 The remnants of water/balloons, after eco-friendly action of cleaning up, eco-art activity and taking photographs, “swept” into a pile. Jarun Recreation and Sports Centre Park, Zagreb (photo taken on 12. 7. 2020, 14:22).
Fig. 10 The remnants of water/balloons collected in a reused lightweight plastic bag from the store. RSC Jarun Park, Zagreb (photo taken on 12. 7. 2020, 14:25). 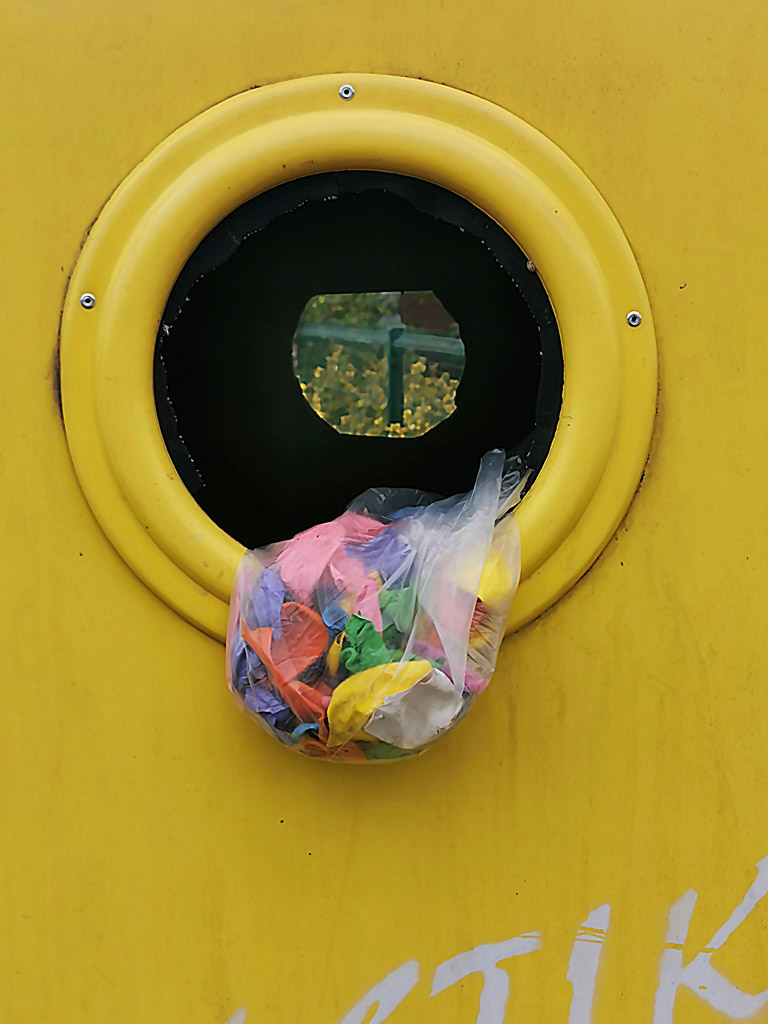 Sl. 11 The water/balloons waste packed in a reused lightweight single-use plastic bag, with an opening tightly tied in a knot, before being disposed of in the plastic recycling container (my subsequent finding out: A wrong container!), Petrovaradinska, Zagreb (photo taken on 12. 7. 2020, 14:50). 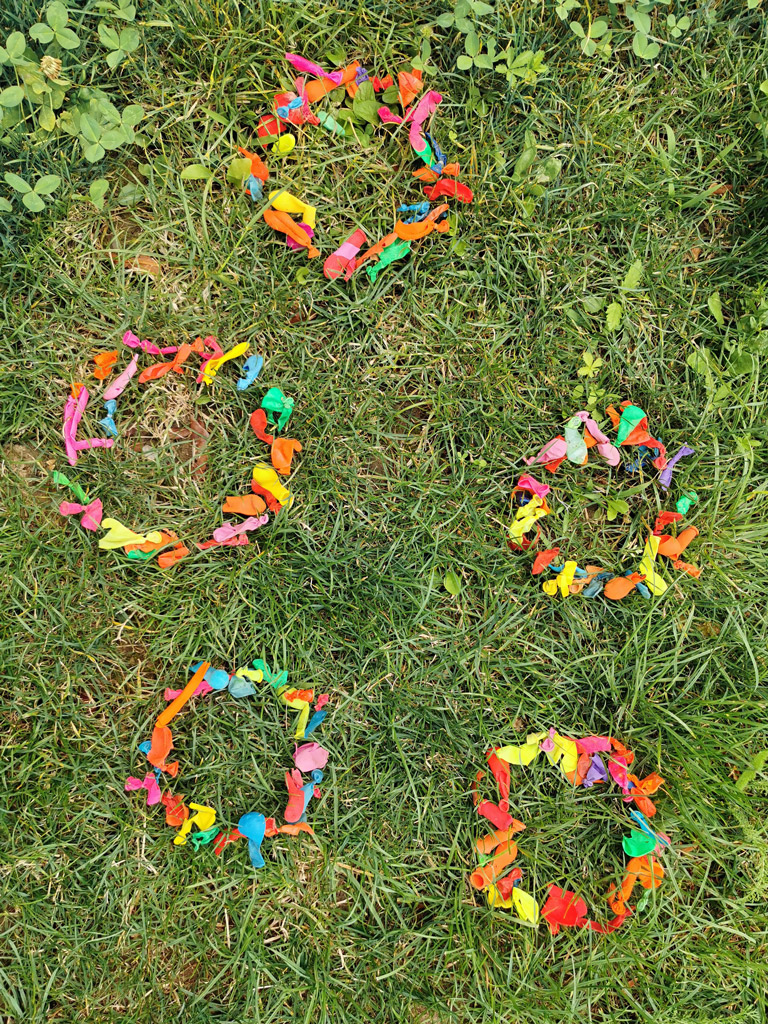 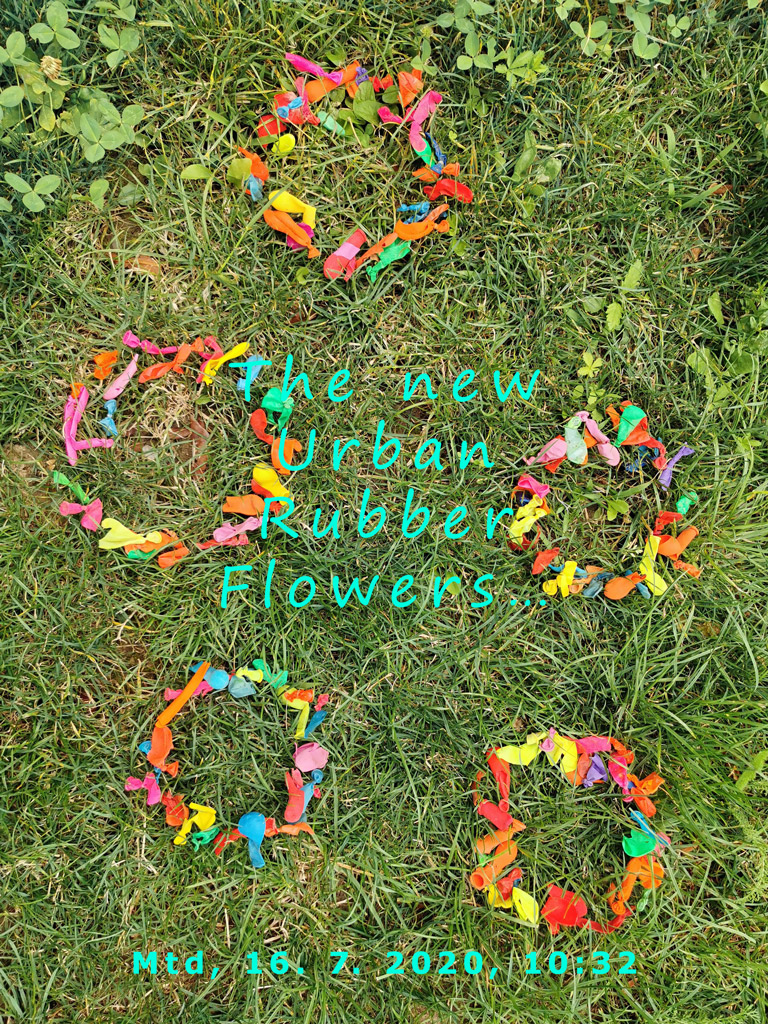 Fig. 12 The composition of five “circles” of the remnants of multicoloured water/balloons, on the lawn, composition height ca. 120 cm. Children’s playground in a small park in Dore Pejačević/Jarnovićeva Street, Prečko, Zagreb (photo taken on 16. 7. 2020, 10:32).
Fig. 13 My eco photo-poem New urban rubber flowers with the digital text over the photograph (Fig. 12).
Note: The circles eventually turned out irregular due to my cleaning up the balloons waste and making the art composition on the ground in conditions of high summer temperature as well as the uncut, shaggy grass. 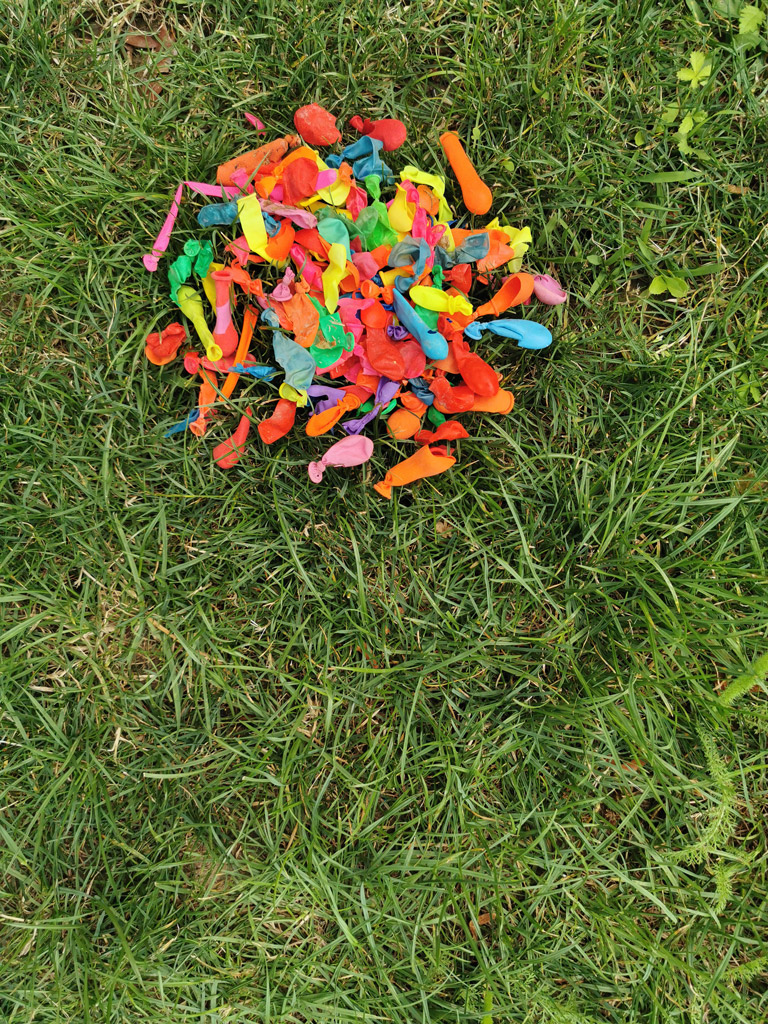 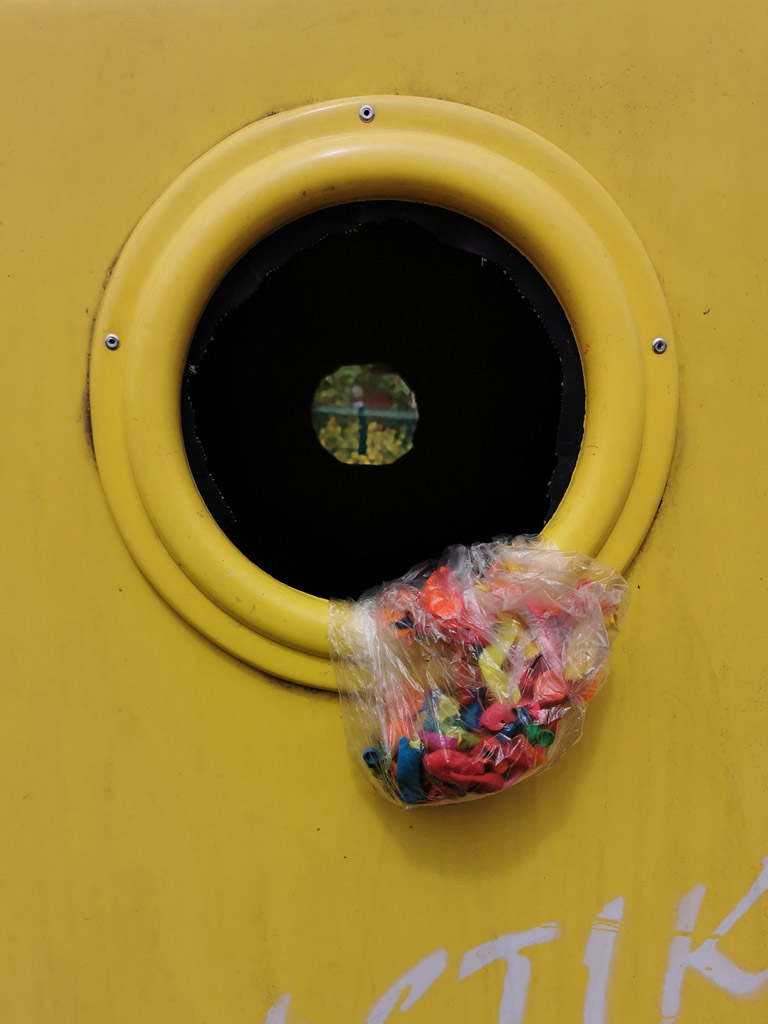 Fig. 14 The remnants of the water/balloons, after eco-friendly action of cleaning up, eco-art activity and taking photographs, “swept” into a pile. Children’s playground in a small park in Dore Pejačević/Jarnovićeva Street, Prečko, Zagreb (photo taken on 16. 7. 2020, 10:38).
Fig. 15 The water/balloons waste packed in a reused lightweight single-use plastic bag – tightly knotted, before being discarded in a container for plastics (my subsequent finding out: A wrong container!), Petrovaradinska, Zagreb (photo taken on 16. 7. 2020, 10:43). 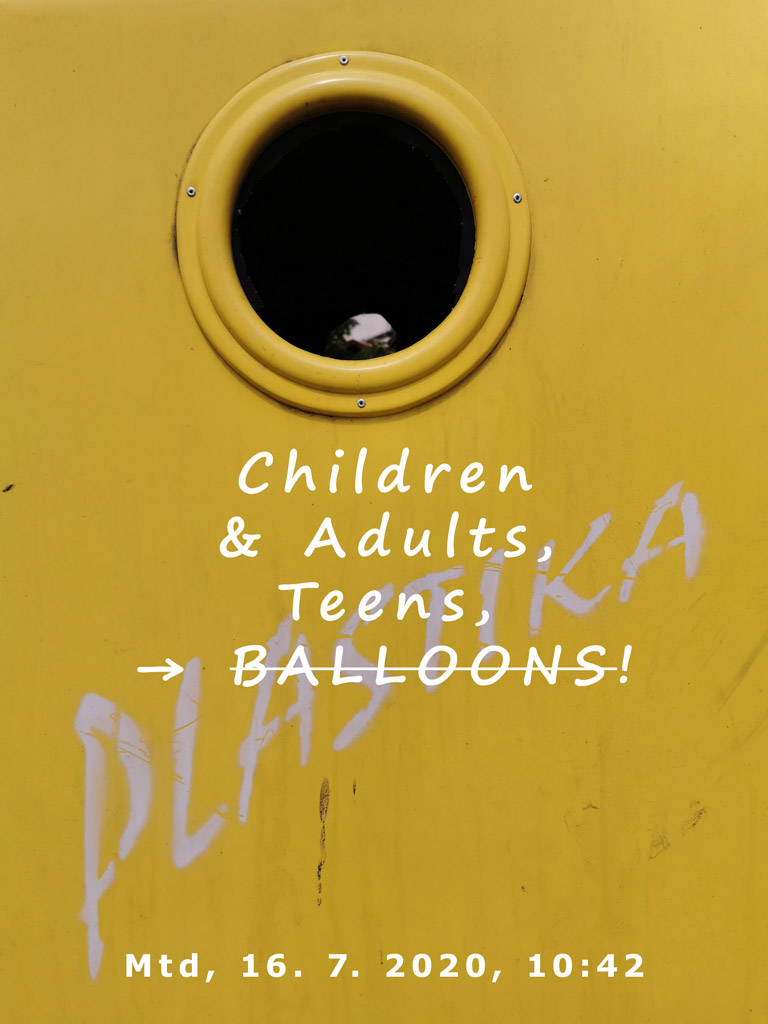 What’s missing in the background photographs of the photo-poems?

After my photographing colourful remnants of burst balloons in four different places in Zagreb, I spent a lot of time searching for and studying all the available textual and pictorial pieces of information about the types of balloons on the party balloon market, the materials they are made of and their impact on the environment.
In mid-July, I went on vacation to Jelsa, a small town on the island of Hvar. There, unexpectedly, I personally witnessed how a “battleground” during and after a game with water balloons really looks like – observing the stages of the game with water bomb balloons at a close family “party“.

In conclusion to the abovementioned I finally realized that probably two things were missing from my previous photographs:
Firstly, those smallest pieces of latex or other un/declared materials of burst balloons. Now I am aware that these tiny pieces are the first to be blown away – even by a very light wind – from the place where the balloons burst. That is why it was hard to expect to find them there, in the original sites I came across.
Secondly, a very common component of water bomb balloons is missing, the one which is scarcely ever included even in the product description – styrofoam balls, as it is the case with the balloons used in the latter “party”, named for the market of a retail chain of a well known toy company “200 Selbstschließende Wasserbomben” (Fig. 17 – 23). In general, a styrofoam ball is used to instantly close a balloon when it is filled with water. However, instead of providing their customers with these important pieces of information, the manufacturers’/retail chains’ only state on the label of most products of water balloons with foam beads, as in my own experience, that they are “selbstschließende” or in the global market in English, “self-sealing”/“self-closing”.

I expect that most of us are at least partially aware of how styrofoam (EPS, expanded polystyrene, polymer styrene, petroleum-based plastic) itself is harmful to health and therefore banned for use in many countries in the world. And it is especially dangerous for small children and animals because it crumbles easily into small pieces or is already shaped like balls of about 8 mm inside water balloons – due to the possibility of swallowing them. Considering the exceptional lightness of the material and the small dimensions of the styrofoam beads, it became clear to me why I had not documented any in my photographs prior to my experience in Jelsa. 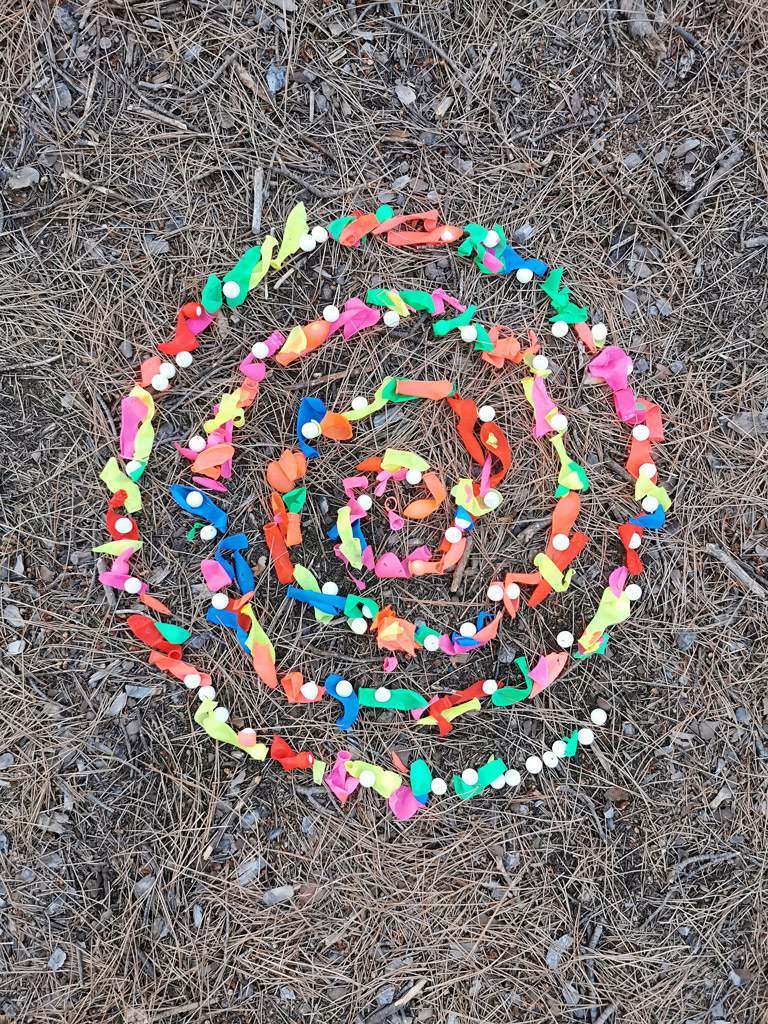 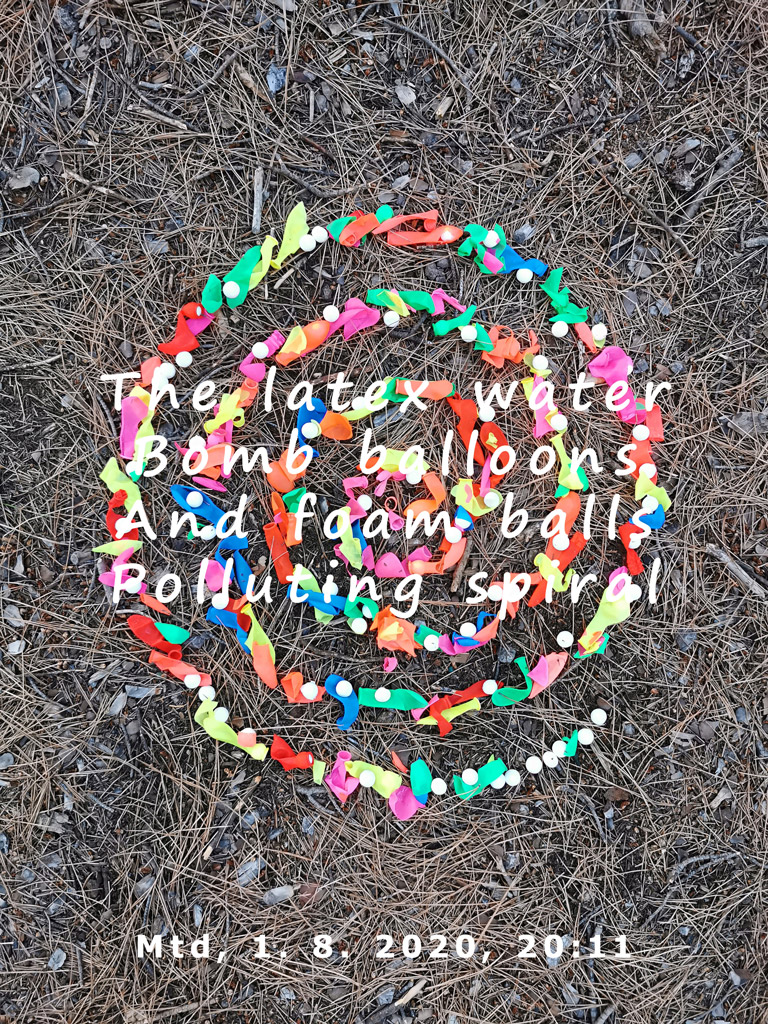 Fig. 17 The spiral composed of the remnants of multicoloured water balloons – pieces of latex and styrofoam balls, on the pinewood soil, the subsequently selected place which could provide a shelter from wind, composition height ca. 80 cm, Jelsa, the island of Hvar (photo taken on 1. 8. 2020, 20:11).
Fig. 18 My eco photo-poem The latex water bomb balloons spiral with the digital text over the photograph (Fig. 17). 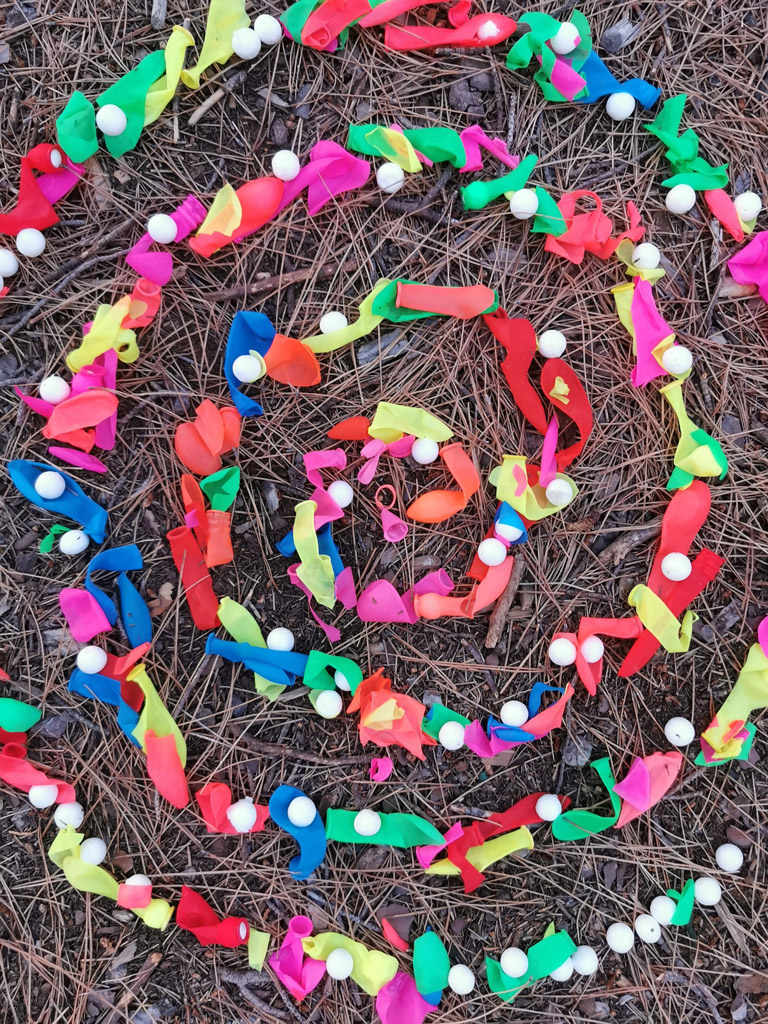 Fig. 19 The spiral composed of the remnants of multicoloured water balloons – pieces of latex and polystyrene, styrofoam beads – on the pinewood soil (detail of Fig. 17). 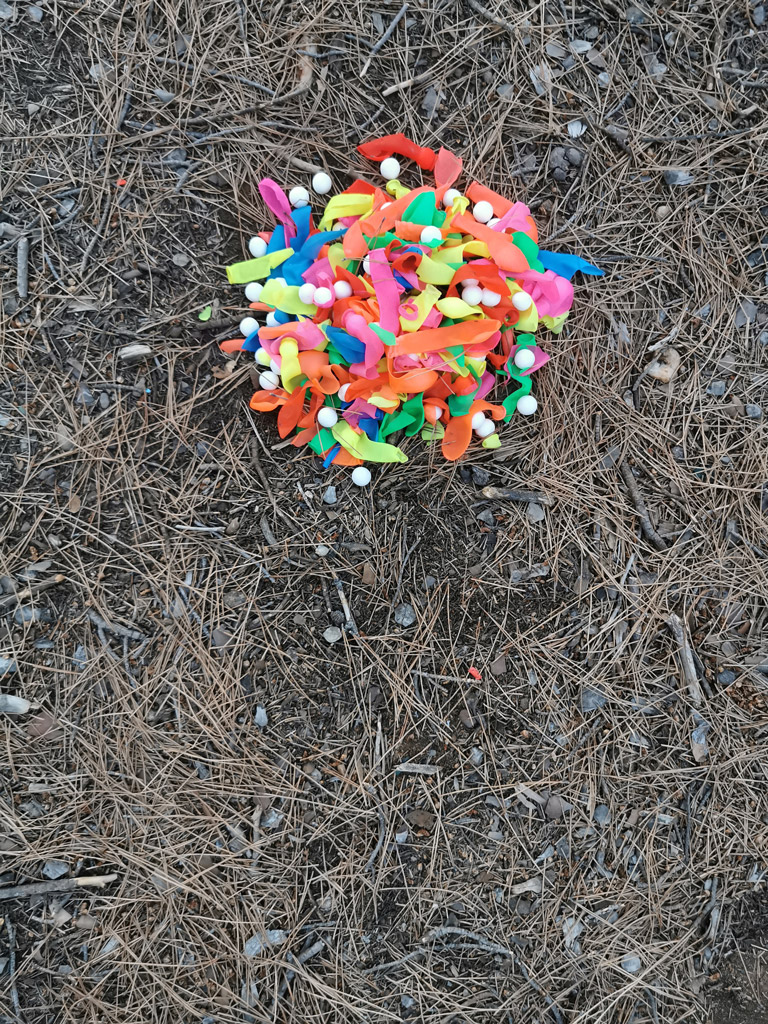 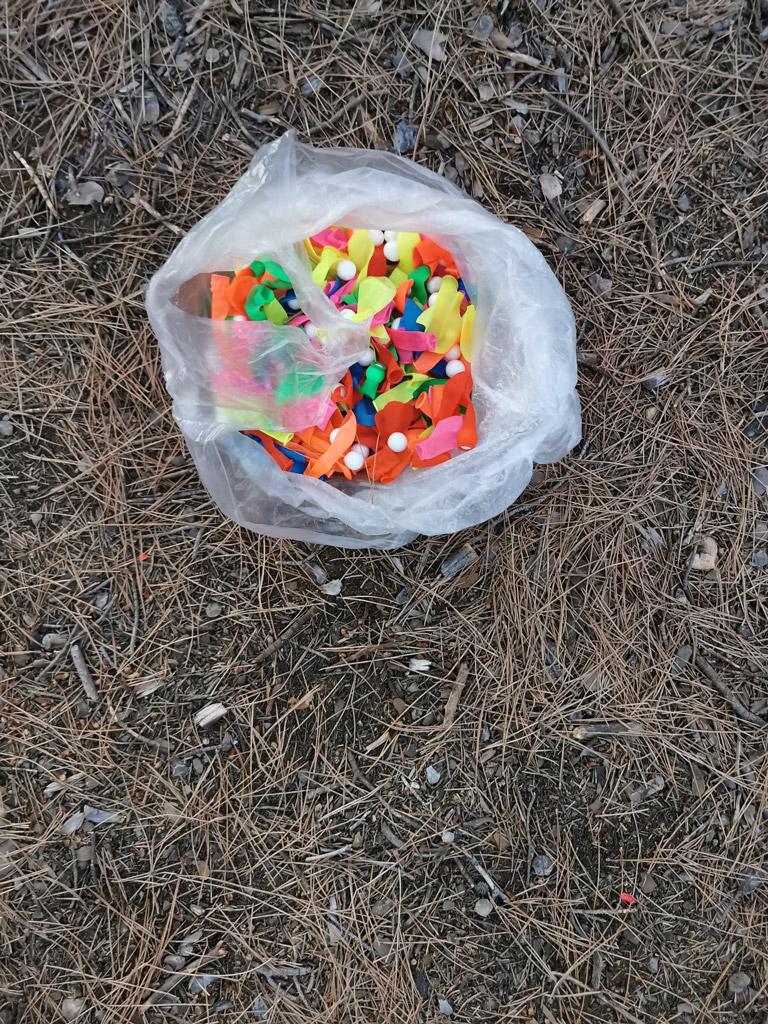 Where to dispose balloon remnants?

After a series of photographs and photo-poems created in Zagreb, while studying the available materials on the Internet, I came to the following conclusions: 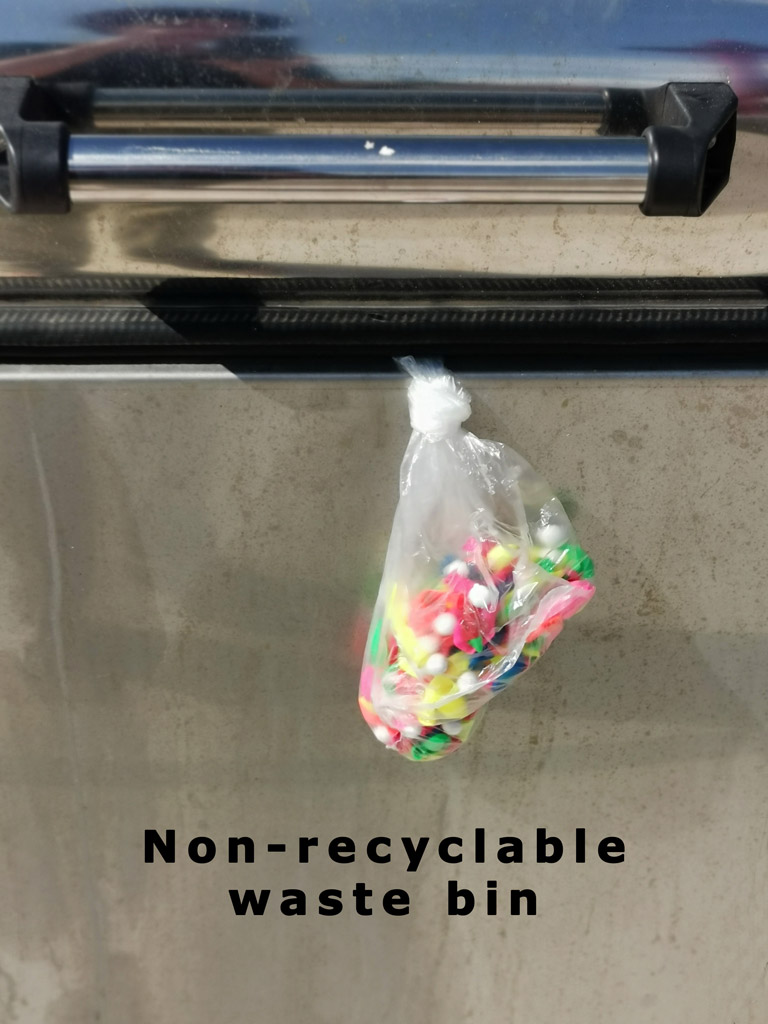 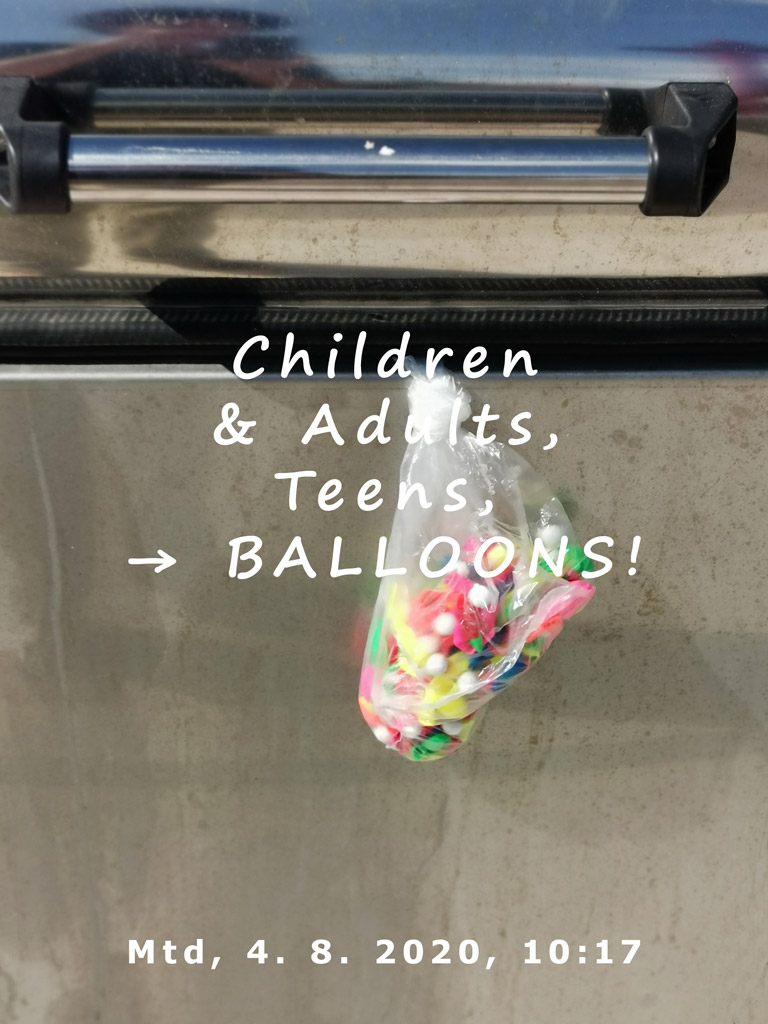 Fig. 22 The remnants of the water balloons in a reused lightweight single-use plastic bag from the store (which is otherwise disposed in a plastic recycling bin), with an opening tightly tied in a knot, before being disposed of in a non-recyclable waste bin (non-renewable municipal waste), Vrboska, island of Hvar (photo taken on 4. 8. 2020, 10:17, after a three-day search for a suitable bin container in Jelsa and the surrounding area).
Fig. 23 My eco photo-poem-instruction → BALLOONS! with the digital text over the photograph of a non-recyclable waste bin (Fig. 22).
Extra: My mini self-portrait-reflection on the bin lid :-)

Although The Act on Sustainable Waste Management in the Republic of Croatia was passed in 2013, and Croatia, in accordance with the EU Sustainable Waste Management Plan, has committed itself to reaching a rate of 50% of separately collected waste by 2020, Croatia’s success is only partial – only in certain cities and counties, on average only 30%. Zagreb, as the capital of the Republic of Croatia, does not currently meet the required standards.

In Jelsa, a small town on the island of Hvar, despite the launch of Waste Management Plan and certain successes in its implementation, I was not able to find any bins/containers for separate waste collection on public surfaces of Jelsa.

In the nearby small town of Vrboska, I found a set of three recycling bins within the marina gas station. However, the same as in Jelsa, there were no bins/containers for separate waste collection on public places. So, one of the clean and shiny, unmarked “mixed municipal waste“ containers served to me for the final stage of my eco-artistic activities started three days earlier in Jelsa.

I will send a written request to the utility company Zagreb City Holding Ltd, Subsidiary Čistoća to include in their documents and guides for citizens the instructions for proper disposal of balloons (latex balloons, water bomb balloons with styrofoam balls, nylon/foil balloons).

Depending on the future health safety regulations of children’s free time in schools and outside of schools related to COVID-19, I will try to organize at least one educational and eco-art Balloons workshop in open space for pupils.