Since the mitigation of the strict measures for social distancing and restriction of movement due to the coronavirus pandemic in Zagreb, Croatia, “balloons park parties“ have been very popular:
Outdoors birthday parties for young children – with a purchased packaged ice cream birthday cake and inflated balloons – organized by their parents in park playgrounds with wooden picnic tables; primary/lower secondary school children’s daily gatherings with Cola or juice and playing with water/balloons in children’s playgrounds and parks with wooden park benches (and a few still remaining public drinking/water fountains in parks); teens’ night socializing with Cola or beer and playing with water/balloons around certain fountain taps in the Jarun Lake city park…

What is common to these park parties?

Common to these park parties are the understandable feeling of joy of all the participants because of the renewed socializing outdoors – free of charge (!), but also a large amount of remnants of rubber balloons. Only a cleaner of a nearby tenement building in one of the parks that I have visited tries to sweep these remains of popped and deflated balloons regularly (Fig. 1, 2 and 3). In other three places which I photographed, the colourful pieces of rubber/latex/nylon have been completely ignored, i.e. left strewn all over an area until winds blow them away and carry elsewhere, including into the nearby lake and river, unless they get stuck in grass or under layers of pine needles. 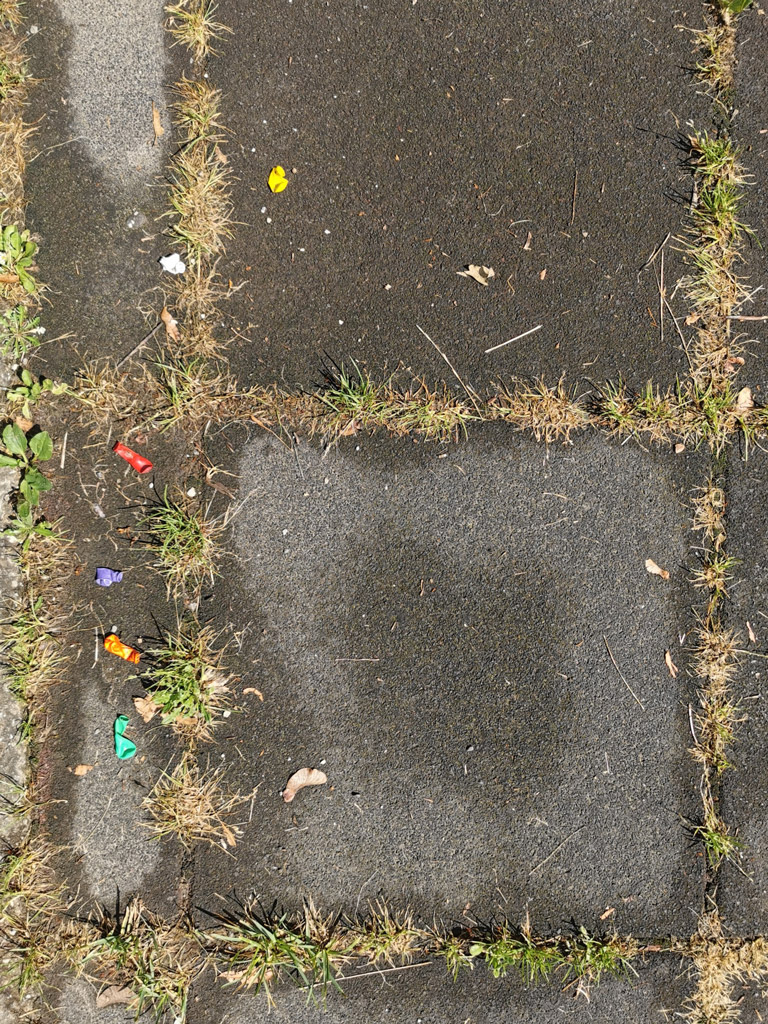 Single-used balloons as long lasting litter and harm to animals

While the information that the nylon balloons (“foil balloons”, air- or helium-filled, shiny balloons made with a layer of plastic, coated with a thin layer of aluminum) are harmful to the environment is quite familiar to a number of balloon buyers, it is not the case with the rubber/latex balloons. Though 1) both “rubber balloons“ and “latex balloons“, i.e. rubber latex balloons are made (like other rubber and latex products) from rubber trees, or more precisely, the major source of natural rubber (also called caucho, caoutchouc, etc., and natural rubber/latex/milk) is the (Amazonian) rubber tree, and though 2) in the process of improvement of its resilience, strength, and resistance, natural rubber is cured by mixing with certain chemical additives, just “latex balloons“ are advertised as environmentally friendly. Furthermore, “latex balloons” are marketed as “biodegradable”, claiming that “they biodegrade at the rate of an oak leaf“, and “they are not harmful to wildlife”. However, instead of being decomposed by bacteria and thereby avoiding pollution, they just become microplastic particles, which consequently (if balloons are thrown or carried by the wind into the sea/lake) collect in the aquatic food chain [1]. What’s more, a latex balloon takes years to degrade. On the website of the nonprofit organization Balloons Blow that “provides information about the destructive and deadly effects balloon releases have on the environment”, a photodocumented biodegradability test is presented. In the photo taken 5 years and 1 month after the two deflated latex balloons were found, they are still not degraded; a note of the total time required for the balloons to degrade says: 7 years and 5 months. The core of the presented problem is best illustrated by the text accompanying the photo taken on 24 November 2012: “Natural latex may be ‘biodegradable’, but after adding chemicals, plasticizers and artificial dyes, how natural could it be? It may in time be ‘degradable’, but it’s surely not ‘biodegradable’. Besides, tossing litter into the environment, whether biodegradable or not, is never environmentally friendly [2]!”
So, since both, nylon and latex balloon remains, are not biodegradable, they are a big danger for animals that may swallow them, unable to distinguish them from food, and die, slowly and in agony, from a blocked digestive tract.

Use single-used balloons to make a single-show artwork!

My first and second photo-poem with a decorative border of the remnants of balloons (left after the morning sweeping the waste from yesterday’s birthday party) and semi-dry grass emerged in the joints between the rubber playground tiles in children’s park no. 1 (Fig. 2 and 3) was created (the text first conceived in English, then in Croatian) on 4th and 5th July 2020. 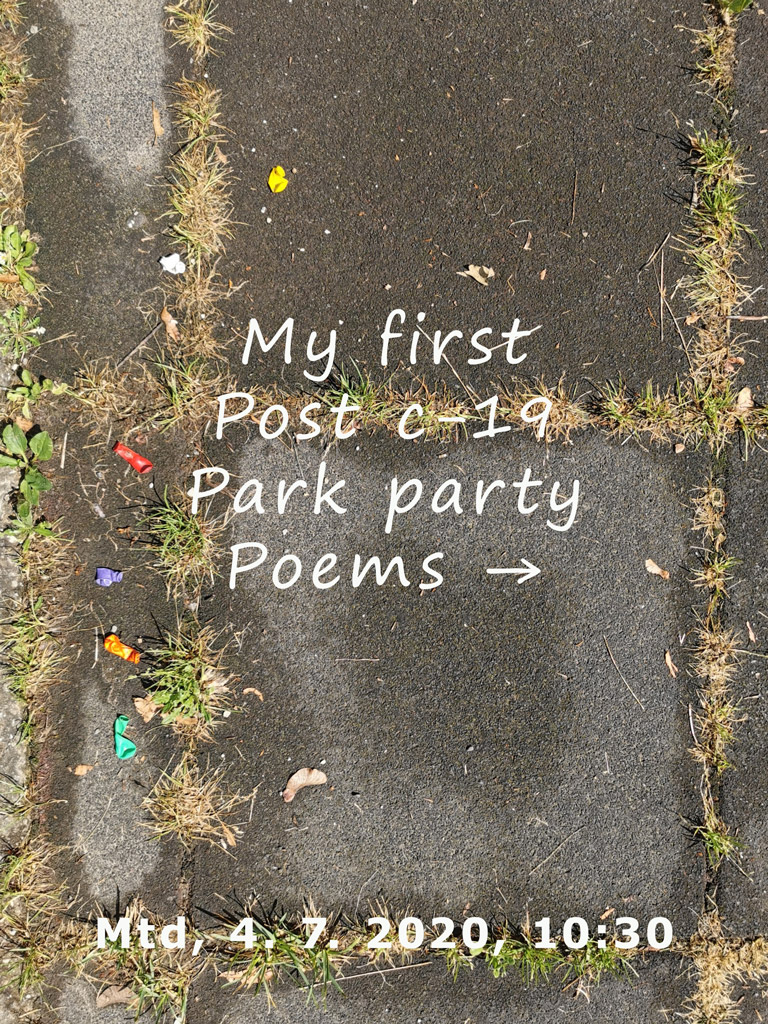 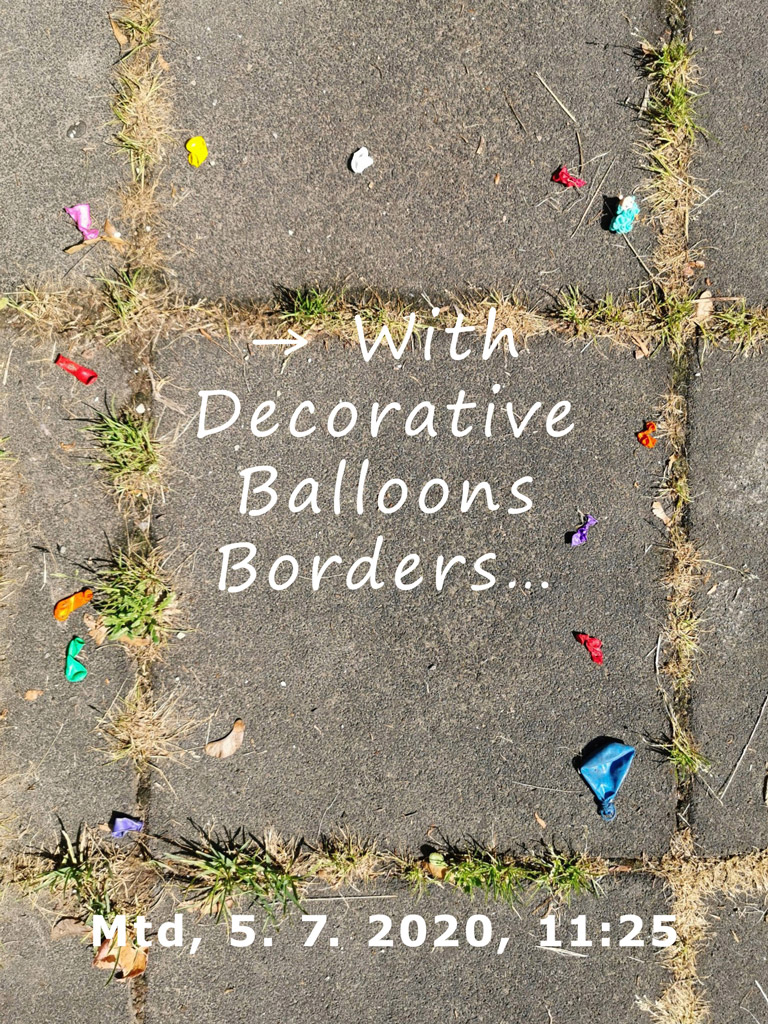 For the first action of documenting the amount of water/balloon remnants on a certain small area of a children’s park in which many small children come to play daily, accompanied by adult family members or babysitters, and possibly a few dogs, I decided on 9th July this year. I collected the colorful pieces of latex balloons found scattered on an area of about 15 m2 on concrete cooler slabs around a small renovated public drinking water fountain and the edges of the grassy part of the park in Kostelska/Zorkovačka Street in Zagreb, built in 1940. I used these ballon remains for the third and fourth photo-poem (Fig. 4 and 5). I used them both dispersed and composed in the manner of decorative borders of medieval illuminated manuscripts and old fairy tale books.
The curious boy Z watched me doing all this and insisted on splashing the “balloons” with water to make them look “prettier”. 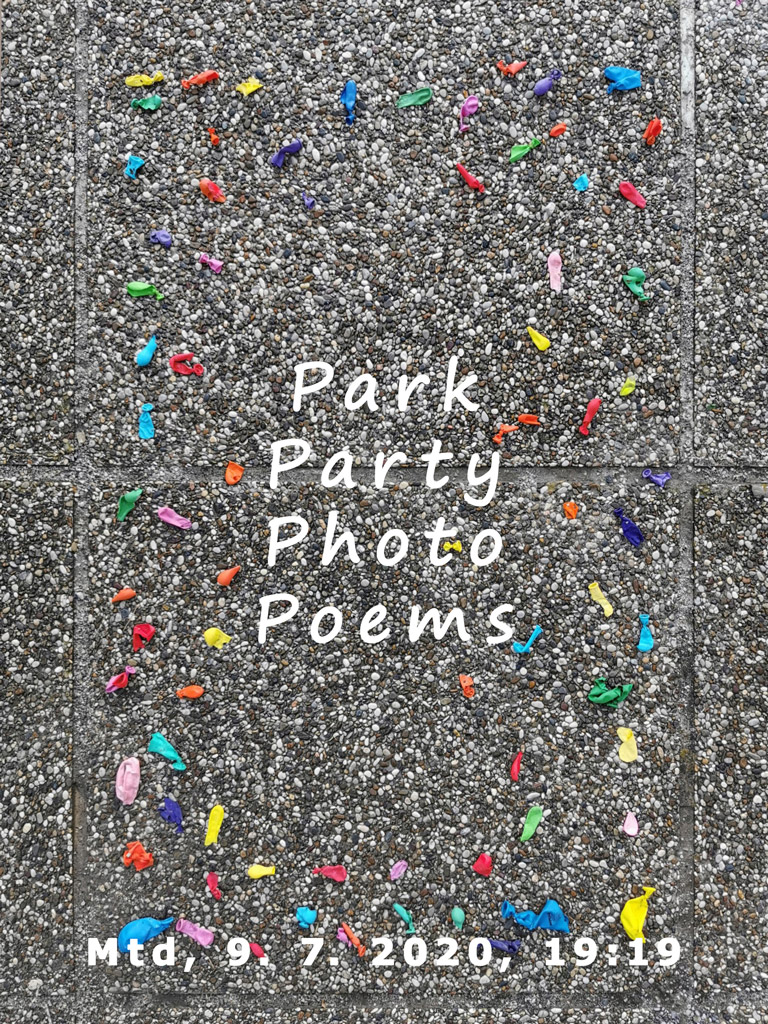 Then I “swept” the balloon remnants into a pile (Fig. 6). Eventually, I tossed them, packed together in a tightly tied clear plastic bag, into one of (very deep) park litter bins. 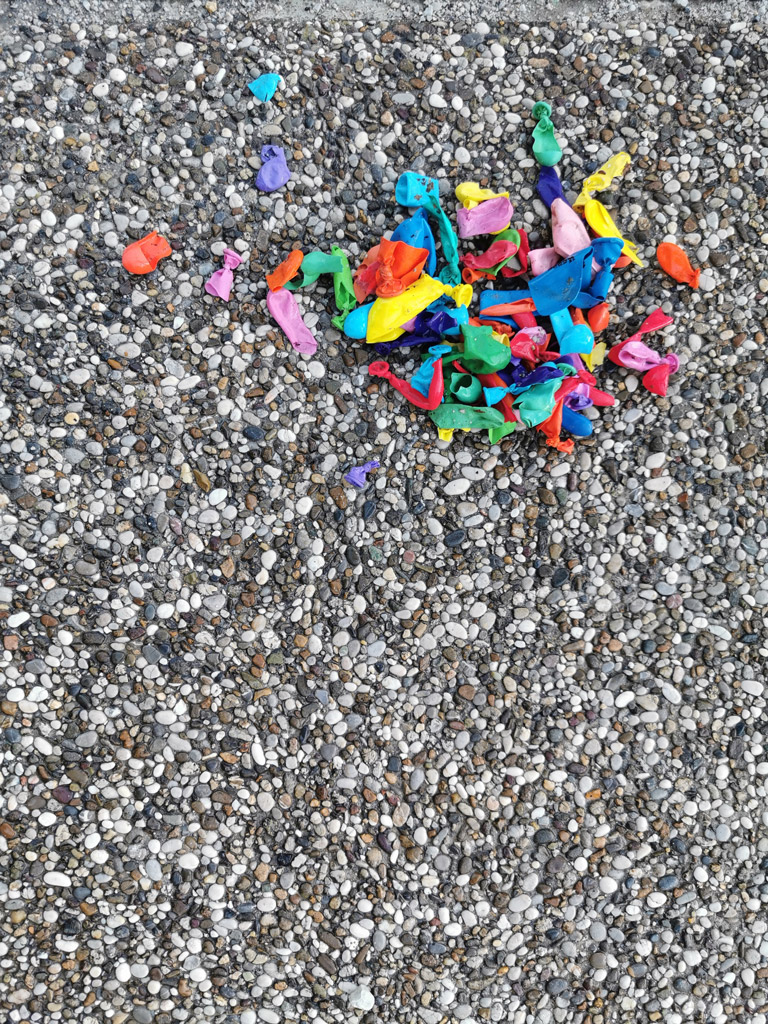 Fig. 6 The “swept” remnants of burst water/balloons. The ground of the park playground in Kostelska/Zorkovačka street, Trešnjevka, Zagreb (photo taken on 9. 7. 2020, 19:35).

A note for possible similar researchers-cleaners-creators: I washed my hands in the fountain, and additionally disinfected them, according to the recommendations for the prevention of the spread of coronavirus.