Child/Art and Me
Blog launched in the time of coronavirus, 2

Episode 2 and an homage to executed urban trees

I am writing my second post as an upgrade and supplement to the whole with the first, which I have not yet published – because the blog is still “under construction”. So at the same time I have been dealing both with general and specific technical/editorial work and my still-beginner’s creation of a new post, simultaneously or in a changing order of writing certain parts in Croatian and English. For all this, I now need that long-sought (40 x :) peace and full concentration, and instead I am reliving the stressful experience of finishing a professional paper as the noisy renovation work is just at its peak in the neighbouring apartment.

I continue my review of several sketch stories from my own experience but also some from much broader human experience of the difficulties imposed by the “time of coronavirus”. 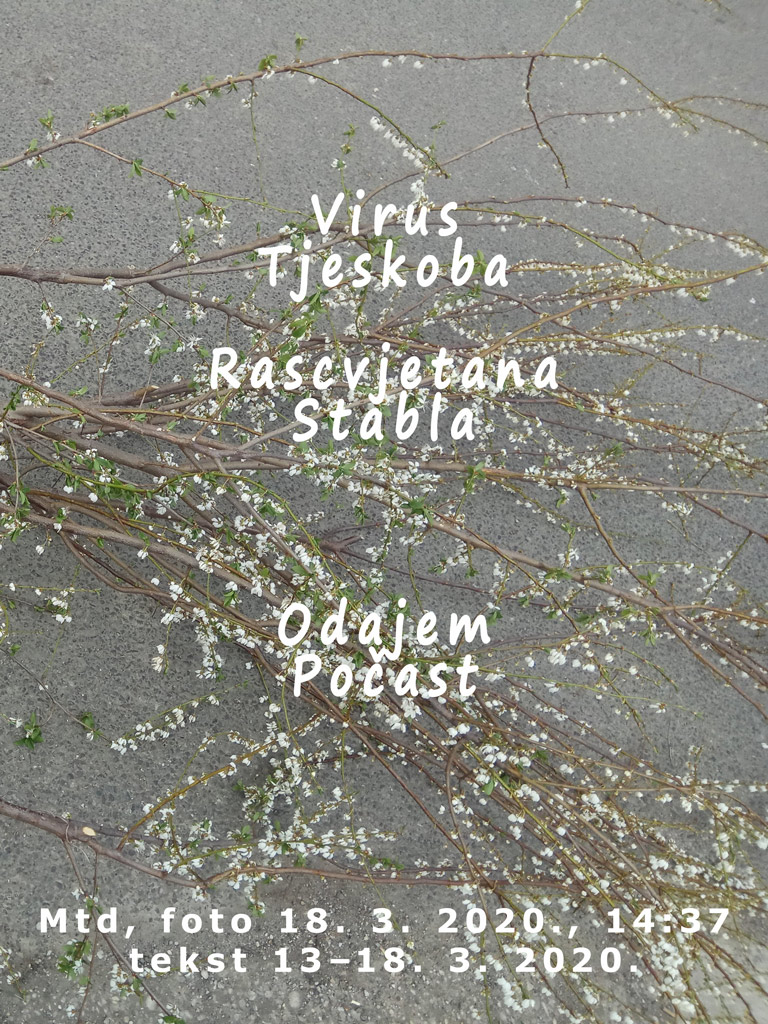 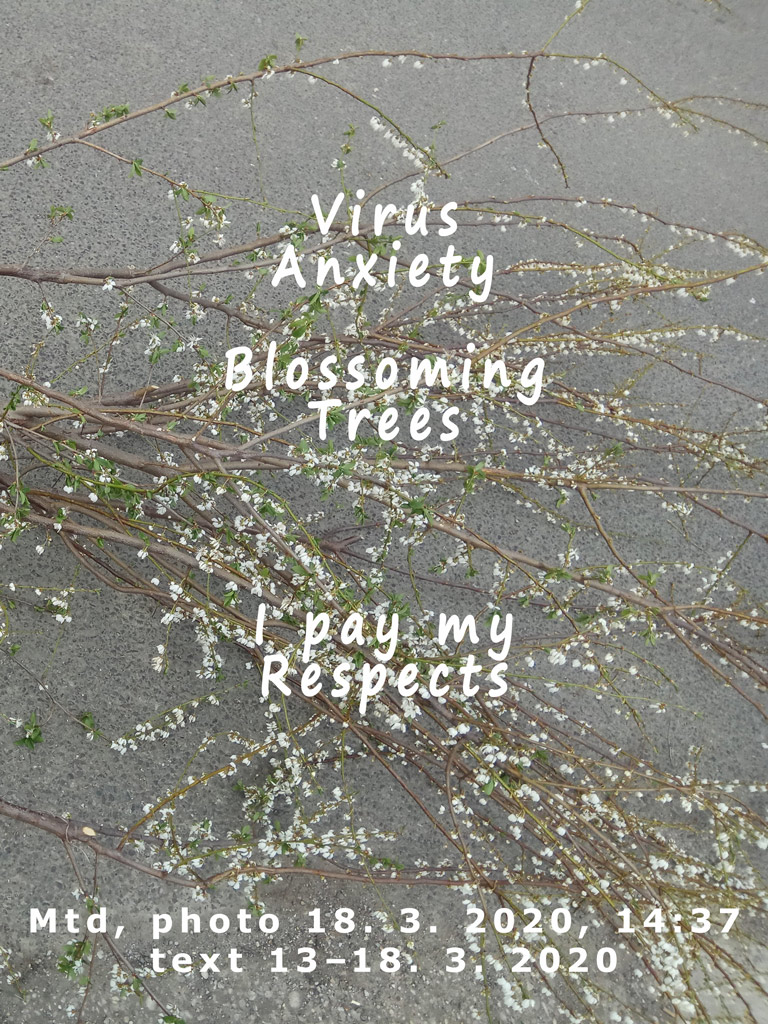 My incidental, silent homage to executed urban trees – cut down and hidden by “coronavirus”.

Coronavirus pandemic plus the earthquake in my town

Harsh restriction measures regarding attending of public spaces were imposed in Croatia on Sunday, 22 March. This very day at 6:24 a.m. my home city Zagreb and its surroundings were hit by a strong earthquake of 5.5 magnitude. Strong, awkward shaking woke me up. I cannot tell whether I am to be scolded or praised for my cold-bloodedness, but after a short exchange with my husband, tired from writing  all night, I staggered back to my bed. I was confident that the 45 years old nine storey building in which we live, was a good build. My husband spent the next one and a half hour in the heated car in front of the building. Most of the citizens stood for hours outside in the open (with even some fleeting snow) – with only a limited possibility of keeping mandatory social distance. When the second, somewhat weaker earthquake in a row of earthquakes that day hit at 7:01 I was at the same spot. Only later did I find out how strong the quakes were in fact, and how devastating were those 30 minutes for Zagreb as we knew it and its future.

Some 600 buildings in the very centre were damaged, many people lost their homes and one girl lost her life. The top of one of the cathedral’s two 108-meter-tall spires collapsed. The cathedral towers were built in the 1880s in a Neo-Gothic reconstruction of the building which dates back to the 13th century. At the time of the earthquake a 29 years long comprehensive reconstruction was in its final stage, so the damaged tower was still covered by scaffolding. (A month later the top of the other tower was demounted while there was an imminent danger from its falling down. Museums and their valuable exhibits, hospitals, schools, universities, newly reconstructed churches… were also damaged by the earthquake.

My silent condolences and a small homage, was one of my rare posts on Facebook –  a series of photos with short comments on the contents (including the citing of the electronic sources of the photos), paying respect to the  badly damaged centre of the city: Coronavirus, self-isolation, and earthquakes 22-23 March in Zagreb, Croatia[1]. 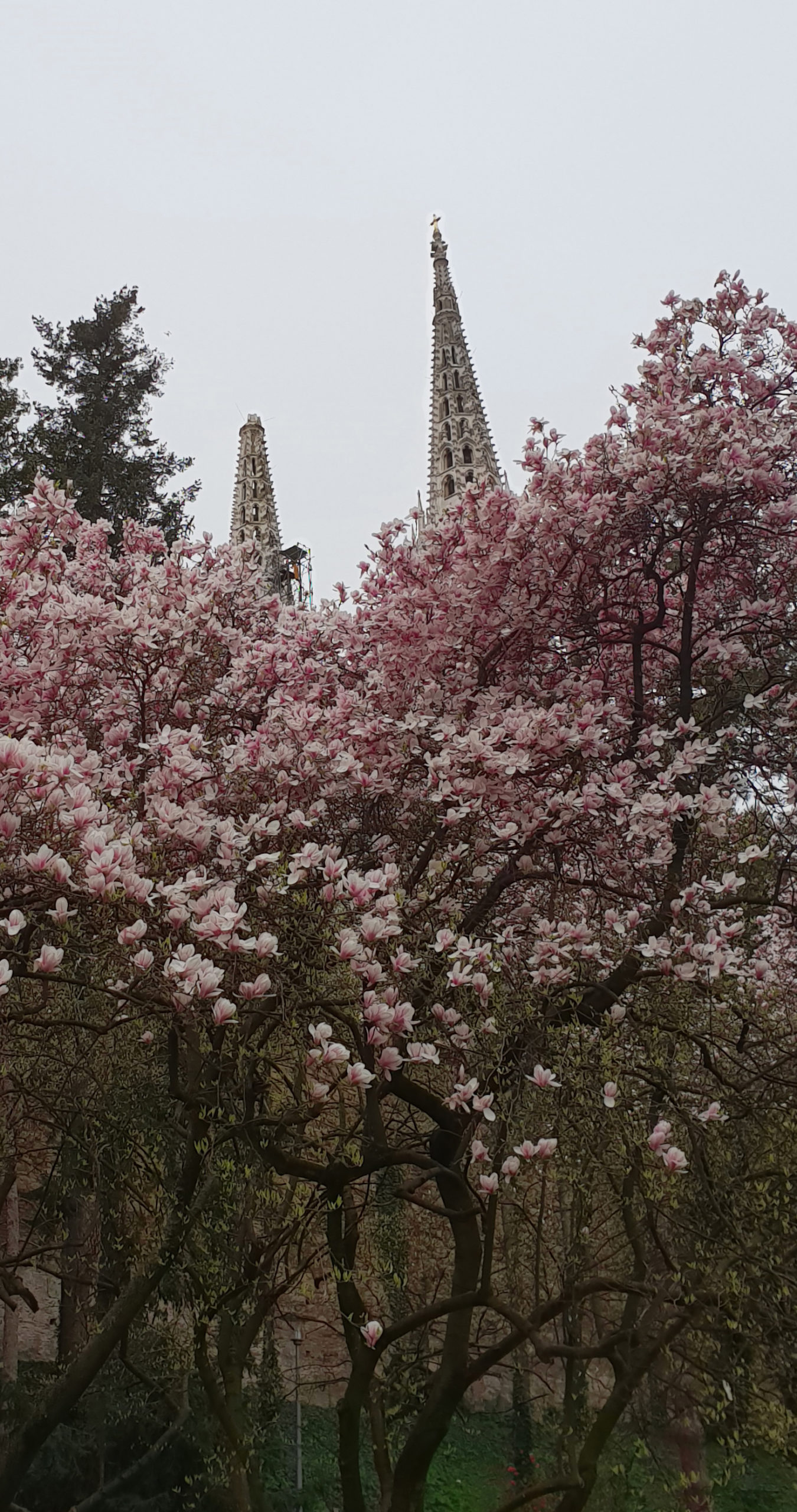 A week later I shared on Facebook a portrait format snapshot of the damaged cathedral spires. The frame (cadre) shows blooming magnolia crowns next to the cathedral’s renaissance defence walls in Ribnjak park – embracing the wounded towers [2]. This remarkable photo was taken at 8:10 a.m. by a friend of mine, Vrijeska Ročić, whose apartment next to the main city square also suffered a considerable damage. My post was accompanied by the following text:

The photo of the Zagreb Cathedral, damaged in the earthquake(s) on 22 March, taken the same morning by my friend Vrijeska. A more optimistic view on all the “Corona Time” problems, which all of us need?

A sad urban story – the front and the flip side

Talking about the scope of the Zagreb tragedy, its causes and consequences it should be pointed out that the majority of damaged buildings are in the area of the protected historical, architectural and urban entity, which only proves that the protection has neither been properly planned nor implemented.
The main causes of the damage (in addition to the external factor, the earthquake itself) are insufficient care and random reconstruction at the state and city level and upgrades and conversions for which all “custodians” and users, including individual tenants, are equally responsible. The long-term neglect has been compensated by occasional projects for the renovation of the facades of buildings – restoration or merely painting the facades, instead of primarily solving the static problems of the entire building. In addition, in the centre of Zagreb, numerous conversions of ground floor spaces into spacious glazed premises were carried out as well as numerous adaptations of apartments, often contrary to regulations and illegal, in which partition and load-bearing walls were removed.

What worries me is a quite imminent danger that the centre of the town is going to lose irrecoverably its urban identity of a Central European town. The identity of the town was contained in picturesque ambience entities dating from the end of the nineteenth century and the first half of the twentieth (and the ambience of the eighteenth century in the Upper Town) more than in single buildings. I am wondering whether at least the professionals – art historians and architects – are ever going to see eye to eye regarding the fundamental controversy over the dilemma: the demanding and expensive renovation of the “old” or contemporary architectural interpolations of a lesser or bigger scope — as, at least incidentally, the profitable construction of the “new”?

My next concern is whether there will be a sufficient level of expertise, critical perspective, impartiality and transparency in implementation of public tenders regarding restauration of damaged buildings but also contemporary interpolations replacing collapsed buildings of lesser value.
Professional community and general public had much to object regarding the new bill on the reconstruction of earthquake damaged buildings in Zagreb, so a new efficient bill and the final Law are anxiously awaited. I also support the motion for a new General Urban Plan of the City of Zagreb which would ensure the protection of space for the entire city and enable its sustainable development.

Time for Torre’s book “Is there life before death?“?

And now, from the same era of “restrictive measures regarding freedom of movement and social activities for protection against coronavirus” – here come a few items regarding my personal “work” on keeping my physical mental spiritual and emotional health.

First, from my past reading “menu” I single out some thoughts and messages, now extremely reduced and condensed, from two, at least at first glance, very different authors.

Croatian psychiatrist and psychotherapist Robert Torre in an interview given to a weekly newspaper, published on a daily paper portal[3], comments on his viewpoints regarding his new book Ima li života prije smrti? (Is there life before death?). His approach might be somewhat strange and unacceptable to the majority of contemporary readers and social network users. On the other hand, maybe it is this approach that could be applicable and useful in our current unoptimistic situation of various limitations, in which we have been stuck.

Torre’s key message is “Hope for less, accept more and never indulge in self-pity”. He considers that instead of trendy commonplace views on life promoting happiness, health and success, there is in fact, a life of “ineradicable tragedy”. Furthermore, “genuine people live life to the full, which necessarily includes ugliness and pain”. He asserts that the greatness of human beings is endurance of failure without succumbing to the negative impact of failure.  He reckons that the currently imposed self-isolation (and the accompanying subjective feeling of loneliness) offers a chance to take it as “voluntary solitariness – a positive feeling of enjoying one’s own company, enjoying in the self” and renewal of our inner life and peace of the mind as a permanent disposition. And, last but not least, he points toward the ability to enjoy “the simplicity of the little happiness”.

Time for “The Little Book of Ikigai“?

Another good read that I reached for late in March which had impressed me three months earlier as a Christmas present to myself, is the he Croatian translation of the book The Little Book of Ikigai: The Essential Japanese Way to Finding Your Purpose in Life, written by Ken Mogi, the neuroscientist and writer, originally published in English in 2017, and translated in Croatian in 2018[4].

The Japanese word ikigai is used for describing life’s pleasures and meaning of life. It consists of words iki (to live) and gai (reason). It represents the Japanese wisdom of life.  It is related to the Japanese tradition, culture and customs as well as a philosophy of life that helps people find fulfilment, joy and mindfulness in everything they do, and consequently live long and healthy lives. Their longeyity and the health benefits of ikigai have already been proved in two scientific studies, in 2008 and 2016. To have your ikigai – “a reason to get up in the morning“, your pleasures of life – and maintain the feeling of a life worth living, even in difficult life situations, is doubtlessly what most people aspire to nowdays.

In this period filled with insecurity, worries, constraints and dissatisfaction, either my own or those in my environment, it seems very stimulating and liberating to focus on some of the attitudes presented here:

“Ikigai resides in the realm of small things. The morning air, the cup of coffee“ or chocolate, the ray of sunshine, cherry blossoms, making the octopus meat soft… (“The joy of little things“ is one of five key pillars which “provide the supportive framework – the very foundations – that allows ikigai to flourish“.)
One’s simple immersion in the joy of “being in the here and now“, “without asking for immediate reward or recognition“, is an integral part of the concept of ikigai and one of its key pillars.
The importance of “living in harmony with other people and the environment“, including social sensibility and showing respect for nature, constitutes the pillar called “harmony and sustainability“.

I especially highlight a part of the text on pp. 94–95, which made me subtly more aware of my need to create time-extended photography cycles of selected motifs from the environment (see the “excerpts“ from the 10-years-long photography project The diary of views from the window of the old house in Jelsa on the back cover of the exhibition catalogue published in the Blog Gallery as well as the two proceeding photographs in this post):
“The Japanese concept Ichigo ichie (literally meaning ‘one time, one encounter’) (…) is the appreciation of the ephemeral character of any encounters with people, things, or events in life. Precisely because an encounter is ephemeral, it must be taken seriously. (…) The realization of the ‘onceness’ of life’s encounters and pleasures provides the foundations for the Japanese conceptualization of ikigai, and is central to the Japanese philosophy of life. When you take notice of the small details of life, nothing is repeated. Every opportunity is special.“

Having no other social contacts except for my husband, I mostly enjoyed walks in the nature, taking photos, visualising photography-poems and parts of my future blog as well as reading; a film now and then, and constructive, simulating conversation on the cell phone with family and friends. My husband started writing and illustrating a picture book for our grandson, something he never had enough time for in the past.